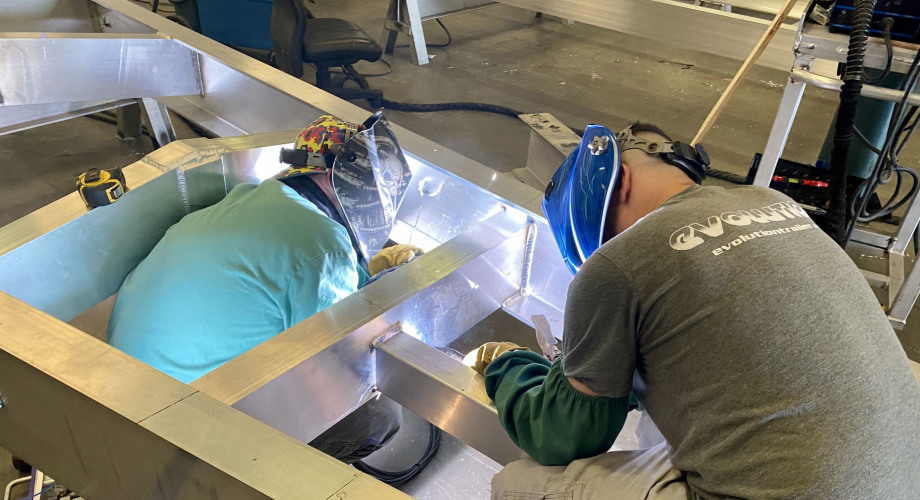 From its beginnings as a supplier of rugged, durable trailers for the U.S. Armed Forces, Evolution Trailer has expanded to become one of the fastest-growing manufacturers of premium welded-aluminum trailers in the recreational marine industry.

The driving force behind Evolution Trailer is our dedicated and talented team. Our people are masters at their craft, and they continually strive to exceed customer expectations. Each of our trailers is custom-built by hand at our Ft. Myers, Florida production facility.

Evolution began as a defense contractor, building rugged and reliable trailers for the U.S. Armed Forces and allies. With nearly 1,000 trailers in service with military operators worldwide, Evolution expanded its focus to become one of the fastest-growing builders of custom trailers for recreational powerboaters. Each Evolution trailer is built to the same uncompromising military-spec standards, using the same premium materials and finely-honed processes, as the trailers it builds for the U.S. Navy, Coast Guard, Army and Air Force, foreign militaries, law enforcement agencies, fire departments, and other no-nonsense operators.

Each Evolution trailer has been designed, built, and proven to perform: To haul better, and to launch and retrieve faster and easier than any other brand. Trailers built to stand up to ‘round-the-clock operation in some of the most unforgiving environments to be found.

Evolution builds its trailers to a higher standard, and has incorporated proprietary features that result in a longer lasting, better hauling, and easier-to-use trailer.

Evolution works with leading boat manufacturers and dealers from coast to coast, and also sells factory direct. Each Evolution trailer is custom-designed to specifically fit a particular hull. This guarantees faster and easier launching and retrieval, and also assures a properly balanced trailer that is easier and safer to haul.

Read on to learn some of the special details that set an Evolution trailer apart from the rest and see our impressive list of standard features. Click here to check out some of our most popular options and upgrades that allow customers to turn their Evolution Trailer into a one-of-a-kind, eye-popping creation.

To begin the process of building your very own custom Evolution trailer, contact us today!